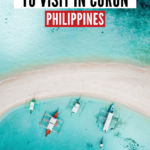 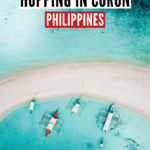 This awesome, free post might contain affiliate links. I’ll receive a small commission when you purchase from my links, at absolutely no cost to you. Your constant support is always appreciated!

Once you book your ticket to Coron in the Philippines, you’ll need to find out what there is to do. That’s where I come in! You can do different day trips around Busuanga Island itself. However, most of the fun things to do are off the main island, like island hopping. Lots of other excursions can be had around Coron Island which is just south of the town of Coron. I’ll get into those in another blog post, because I first want to focus on venturing a little further away to go Coron island hopping.

The map below should give you a good idea of the layout of the area. Coron Town Proper is what’s pinned on the map. That’s where you’re going to want to stay in Coron to get the most of your time in the area with the most access.

The Best Tour Companies Around Coron for Island Hopping

For 95% of scenarios, I would wait until you arrive to book any tours. It’s a lot easier and possibly cheaper to go to the tour companies in person, see what they have to offer, and then see how you’re going to use your time. Most people will arrive in Coron too late to do a tour that day, so you aren’t wasting a day by waiting until you get there to arrange your excursions for the week.

Everywhere you walk you’ll be in view of at least 5 different tour companies. Not all tour companies are made equally. The price will vary a little bit between companies, but generally the price is the same across the board. That being said, some just seem sketchier than others. From lots of research, I’ve found the below companies to have the best reviews and be the most trustworthy.

Nice in Paradise is the company we used and they were great. They even had a private departure area so you don’t have to fight through the crowds and vendors trying to sell you everything under the sun before your tour. You walk behind their shop through a courtyard area and off onto a private dock area. Their boats are bright green so they’re hard to miss.

The others listed above had good reviews online and were friendly when we interacted with them briefly. We ended up going with Nice in Paradise because they happened to be open when we were ready to book and had availability. The girls who work in the office and the boat drivers and guides were all very kind.

The two main ways to go island hopping around Coron is either by shared boat or private boat. The best Coron island hopping tour companies I listed above (in addition to the dozen others) all have a set price for the tours. I don’t think this is really something you can bargain for, although we didn’t really try. A lot of tricycle drivers will have a laminated paper they’ll advertise tours to you with. If anything, I think those guys may be the ones you could bargain with. The tours seemed to all be within the same price.

What Islands to Visit Near Coron

The main islands to visit on the Coron island hopping tours are a bit further outside of the town area. Most tours will leave around 8:30 in the morning depending on the weather. We were in Coron during a fairly windy week so had some later departures waiting upon approval from the Coast Guard. It’s about 1.5 or 2 hours to the islands across Coron Bay. If you have trouble with sea sickness, I would advise taking something the night before and the morning of your trip as Coron Bay is pretty open and more sensitive to the wind. Most of the islands people stop at on these excursions are around this area, so you get what I mean about being on the opposite side of Coron Bay.

On these types of island hopping tours, you’ll have different islands to choose from. If you do a shared tour, you’re stuck going where they’re going. That’s not necessarily a bad thing because the islands they go to are incredible. If you have a private tour, you have the option to choose where you go. Keep in mind, even with a private tour, you’ll probably still only be able to make 4 or so stops because you only have until about 6 pm to get back that night.

Bulog Dos Island was the first stop on our Coron island hopping adventure. It’s right next to an island called Bulog Uno (get it?). Our guide told us they’re not allowed to stop at Bulog Uno. However, depending on the tide you may be able to walk over as there’s a sandbar that crosses to this island. There are two accessible sides of this island. The side all the boats pull up to has a beautiful beach you can lay out on or swim around.

The other side is more rocky, but absolutely gorgeous. To the right of the beach you pull up to, there’s an area with a bunch of trees and a walkway up to the top of this rock formation. At the top, you have the most beautiful view of both sides of the island. You also have a good view across the water to the only 5-star resort in Coron. There’s a hammock up there too to take a nice mid-morning nap.

Banana Island was our second stop of the day. To start off, we ate a delicious lunch prepared by our guide (they bring a grill on the boats – it’s crazy!). I was super excited to get to Banana Island thinking it’d be littered with bananas. Our guide quickly crushed my dreams by telling me there are no bananas at all growing on the island. Upon my immediate questioning of the name, he informed us the island looks like a banana leaf, giving it the name of Banana Island.

There’s a pretty sizable beach on this island. There’s also about half a dozen hammocks to lay on here at this beach spread between all the gorgeous palm trees. You can buy different drinks and snacks at the island, so make sure you bring cash with you! There’s even a toilet, although I’m not sure how clean it is.

Pay really close attention to this section because Ditaytayan Island is NOT a typical island the shared tours stop at on their Coron island hopping tours. I’m so thankful I found this island when I was researching because it was one of my favorite stops. The island is pretty typical with the exception of this perfect sandbar that juts out pretty far from the island. You have to make sure you stop here at the right time of day, otherwise you’ll miss it. We stopped by mid afternoon during low tide and it was more perfect than I could have imagined.

The sandbar that juts out is pretty skinny so you can easily access both sides. The one side is more protected from the wind than the other. The water was so relaxing to just lay in. The sand was super clear, so there’s no need to bring out those really fashionable water shoes here. There weren’t a ton of other boats there, but we definitely weren’t the only ones. If you own a drone, make sure you bring it for this island if nothing else. The drone shots I got make me drool. Check it out for yourself down below.

Malcapuya Island was our last stop of the day. The “Three Island” tours mostly go from Bulog Dos Island to Banana Island then end at Malcapuya Island. This was the most built up of the islands. Keep in mind, it’s still definitely a low key island. There are a bunch of huts with benches to sit in. There are some vendors selling things like drinks and fresh coconuts. There’s a basketball court where a bunch of locals were playing.

This was the busiest of the islands we visited on our tour, but it might be the most beautiful and the biggest (which would make sense why it was the busiest!). Our pitstop at Ditaytayan Island had us here towards the end of the day which allowed us to be there as most people were leaving. However, that also meant the Coconut Man was out of fresh coconuts and nothing tastes better at the end of a long day in the sun than a fresh coconut.

Overall, it’s hard to find a bad island to visit around Coron for island hopping. We passed so many on our way there that I wished we could have stopped at. You do have to choose your islands ahead of time because there are environmental fees paid up front and the boats need permission to get to the islands by paying that fee.

We were really happy with Nice in Paradise. The only negative we had (which wasn’t really a negative) was that our driver initially didn’t realize we were supposed to be going to Ditaytayan Island. We told him we’d already paid for it when we arranged it with the girls at the office and we just had to call them to verify that. Make sure you verify what stops you’re making with your driver before you head out so there’s no confusion.

I found your web site from Google and I have to claim it was a great locate. Thanks!

Ill be heading to the Philippines this year and I will absolutely be using this guide!

This was soooo helpful! It's been a while since I've been to the Philippines and Coron was a placed I had missed before!